A house belonging to Major-General K.M. Poltoratsky was built on Teatralnaya Square, to the left of the Bolshoi Theatre and opposite the Maly Theatre, in 1821. It was designed by architects F. Shestakov and O. Bove. The house was one of the centres of Moscow"s cultural life, balls and parties were held there attended by the cream of society. The niece of the master of the house, Anna Kern, also used to come there.

In 1840 the house changed hands; its owner now was the merchant P.A. Bronnikov, who let the first floor to the theatre company of the Moscow "Artistic Circle" from 1869 until 1882. Alexander Ostrovsky was the organizer of this group of outstanding literary and art figures. The theatre of the "Artistic Circle" was one of the first private theatres of Russia.

In 1882 the building was rented by the famous actor and managing director M.V. Leontovsky. On his order the architect B. Freidenberg rebuilt the house, considerably changing =both its interior and outside. Now it looks the same as it did in the 1880s. Leontovsky, a disciple of M.S. Shchepkin, wanted to organize a good drama theatre with a broad repertoire, which would include operetta, fairy-tale plays, tragedy and comedy. On December 29, 1882, the theatre was opened, but it didn"t live long. 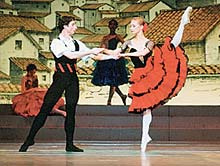 In September 1898 the Imperial Novy Theatre was opened there which gave performances with the participation of young actors of the Maly and Bolshoi theatres. The Maly youth company was directed by the actor and teacher A.N. Lensky.

In the early 20th century the house was taken by the private opera company of S.I. Zimin, and in 1909 the premises were rented by the well-known managing director and actor K.N. Nezlobin.

During the 1920s, opera and ballet productions of the Bolshoi Theatre were staged there

In the autumn of 1924 the First Studio of the Art Theatre was given the name the Moscow Art Theatre and it received the premises on Teatralnaya Square. The theatre existed until 1936.

In its foyer there will be a one-man exhibition of the theatre's chief artist and designer, winner of the Russian State prize and Moscow Prize, Stanislav Benediktov.